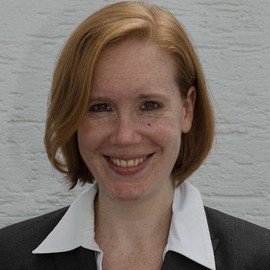 I am a consultant radiologist with special focus on quantitative and cardiovascular imaging including radiomics at the University of Zurich and the Department of Diagnostic and Interventional Radiology of the University Hospital Zurich.

My special interest lies in the translation of quantitative imaging techniques to clinical routine and in the application of machine learning algorithms in medical imaging science. Over the past few years, my research has focused on the evaluation of the potential of radiomics and texture analysis combined with machine learning techniques for cardiac MRI. This work has led to an increasing awareness of the standardization issue in the field of radiomics. Currently, my group is working on various projects aiming to apply radiomics and deep learning to cardiac and oncological imaging, with a special focus on standardization. Since these emerging technologies require large datasets to accurately evaluate their performance, I was able to take lead in a large nationwide multicenter trial aiming at standardizing quantitative cardiac MRI.

It is my strong belief that research can only thrive through collaboration, hence my involvement in scientific societies such as the working group on cardiac imaging and of medical imaging IT of the German Radiological Society and the European Society of Medical Imaging Informatics (EuSoMII) has shown to be extremely rewarding.

No less important and rewarding for me is medical education, which has led me to develop and lead a quality improvement project for radiological teaching at my former department in Cologne, Germany. We completely overhauled teaching, providing lectures on demand and incorporating online voting systems during lectures. Since then, I have been involved in the development of the national training curriculum of medicine (Nationaler Kompetenzbasierter Lernzielkatalog Medizin, NKLM) as a speaker of the project group “digital compentencies” and as a co-speaker in the working group for the implementation of NKLM in Germany. The implementation of digital skills into the medical training curriculum is an extremely important topic, and I am excited about being part of this ongoing process.

Founder and CEO of Lernrad GmbH

Deutsche Röntgengesellschaft 2020
For creation of ‘CoRad19’, an online education tool for radiology during the Covid pandemia

Invest in the youth program 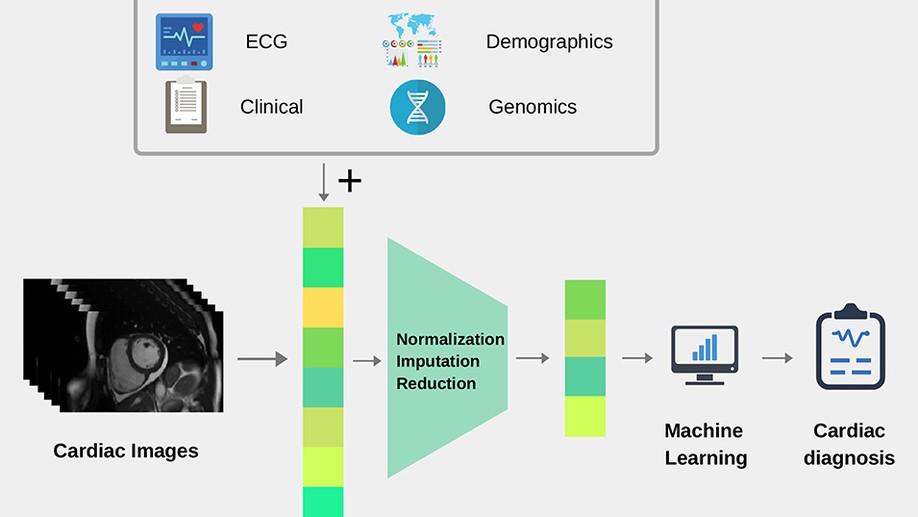 Cardiac imaging plays an important role in the diagnosis of cardiovascular disease (CVD). Until now, its role has been limited to visual and quantitative assessment of cardiac structure and function. However, with the advent of big data and machine learning, new opportunities are emerging to build artificial intelligence tools that will directly assist the clinician in the diagnosis of CVDs. This paper presents a thorough review of recent works in this field and provide the reader with a detailed presentation of the machine learning methods that can be further exploited to enable more automated, precise and early diagnosis of most CVDs. 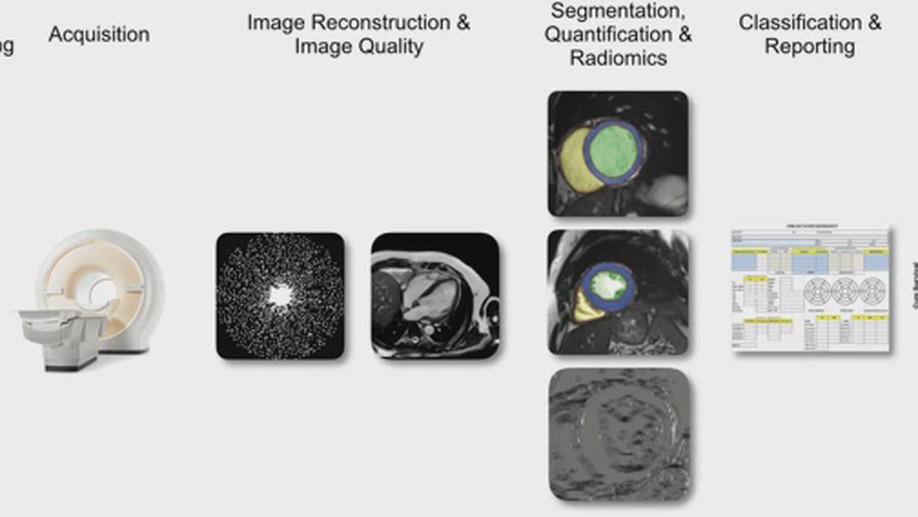 Machine learning (ML) is making a dramatic impact on cardiovascular magnetic resonance (CMR) in many ways. This review seeks to highlight the major areas in CMR where ML, and deep learning in particular, can assist clinicians and engineers in improving imaging efficiency, quality, image analysis and interpretation, as well as patient evaluation. We discuss recent developments in the field of ML relevant to CMR in the areas of image acquisition {&} reconstruction, image analysis, diagnostic evaluation and derivation of prognostic information. To date, the main impact of ML in CMR has been to significantly reduce the time required for image segmentation and analysis. Accurate and reproducible fully automated quantification of left and right ventricular mass and volume is now available in commercial products. Active research areas include reduction of image acquisition and reconstruction time, improving spatial and temporal resolution, and analysis of perfusion and myocardial mapping. Although large cohort studies are providing valuable data sets for ML training, care must be taken in extending applications to specific patient groups. Since ML algorithms can fail in unpredictable ways, it is important to mitigate this by open source publication of computational processes and datasets. Furthermore, controlled trials are needed to evaluate methods across multiple centers and patient groups. 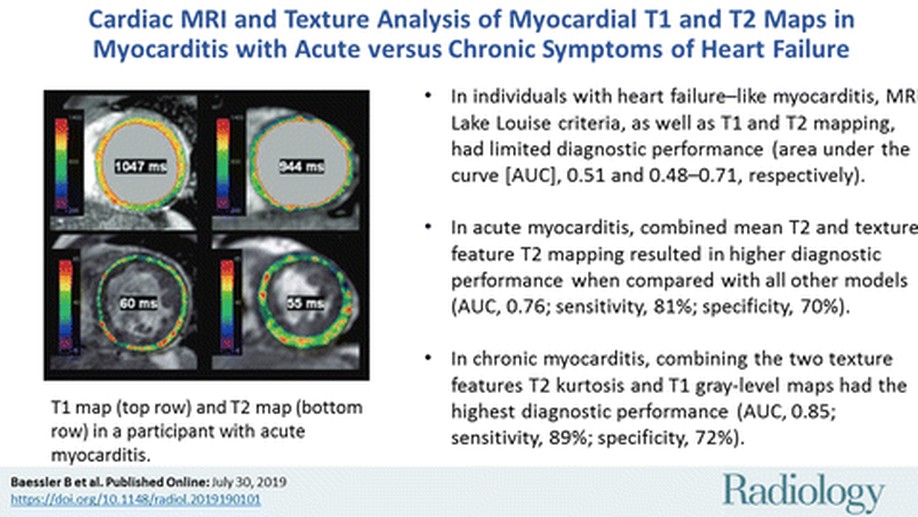 Background The establishment of a timely and correct diagnosis in heart failure-like myocarditis remains one of the most challenging in clinical cardiology.PurposeTo assess the diagnostic potential of texture analysis in heart failure-like myocarditis with comparison to endomyocardial biopsy (EMB) as the reference standard.Materials and MethodsSeventy-one study participants from the Magnetic Resonance Imaging in Myocarditis (MyoRacer) trial (ClinicalTrials.gov registration no. NCT02177630) with clinical suspicion for myocarditis and symptoms of heart failure were prospectively included (from August 2012 to May 2015) in the study. Participants underwent biventricular EMB and cardiac MRI at 1.5 T, including native T1 and T2 mapping and standard Lake Louise criteria. Texture analysis was applied on T1 and T2 maps by using an open-source software. Stepwise dimension reduction was performed for selecting features enabling the diagnosis of myocarditis. Diagnostic performance was assessed from the area under the curve (AUC) from receiver operating characteristic analyses with 10-fold cross validation.ResultsIn participants with acute heart failure-like myocarditis (n = 31; mean age, 47 years +/- 17; 10 women), the texture feature GrayLevelNonUniformity from T2 maps (T2_GLNU) showed diagnostic performance similar to that of mean myocardial T2 time (AUC, 0.69 for both). The combination of mean T2 time and T2_GLNU had the highest AUC (0.76; 95% confidence interval [CI]: 0.43, 0.95), with sensitivity of 81% (25 of 31) and specificity of 71% (22 of 31). In patients with chronic heart failure-like myocarditis (n = 40; mean age, 48 years +/- 13; 12 women), the histogram feature T2_kurtosis demonstrated superior diagnostic performance compared to that of all other single parameters (AUC, 0.81; 95% CI: 0.66, 0.96). The combination of the two texture features, T2_kurtosis and the GrayLevelNonUniformity from T1, had the highest diagnostic performance (AUC, 0.85; 95% CI: 0.57, 0.90; sensitivity, 90% [36 of 40]; and specificity, 72% [29 of 40]).ConclusionIn this proof-of-concept study, texture analysis applied on cardiac MRI T1 and T2 mapping delivers quantitative imaging parameters for the diagnosis of acute or chronic heart failure-like myocarditis and might be superior to Lake Louise criteria or averaged myocardial T1 or T2 values. 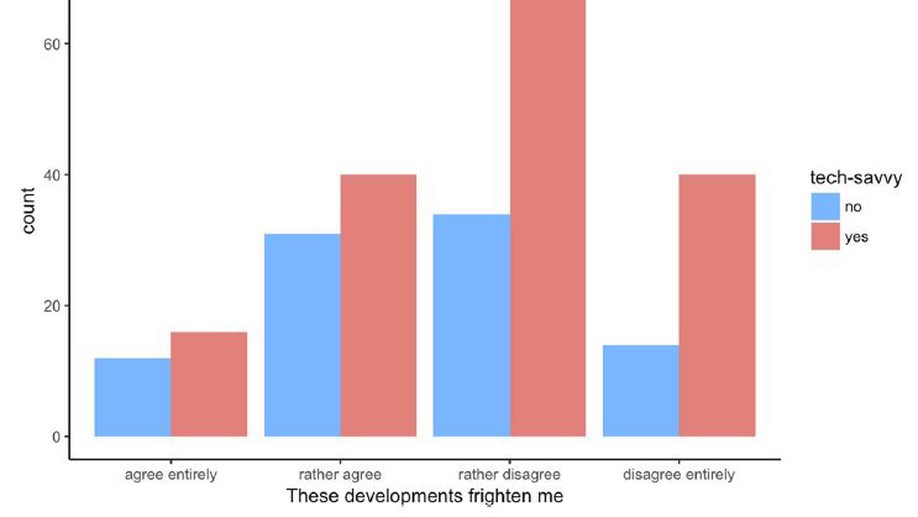 OBJECTIVES To assess undergraduate medical students’ attitudes towards artificial intelligence (AI) in radiology and medicine. MATERIALS AND METHODS A web-based questionnaire was designed using SurveyMonkey, and was sent out to students at three major medical schools. It consisted of various sections aiming to evaluate the students’ prior knowledge of AI in radiology and beyond, as well as their attitude towards AI in radiology specifically and in medicine in general. Respondents’ anonymity was ensured. RESULTS A total of 263 students (166 female, 94 male, median age 23 years) responded to the questionnaire. Around 52% were aware of the ongoing discussion about AI in radiology and 68% stated that they were unaware of the technologies involved. Respondents agreed that AI could potentially detect pathologies in radiological examinations (83%) but felt that AI would not be able to establish a definite diagnosis (56%). The majority agreed that AI will revolutionise and improve radiology (77% and 86%), while disagreeing with statements that human radiologists will be replaced (83%). Over two-thirds agreed on the need for AI to be included in medical training (71%). In sub-group analyses male and tech-savvy respondents were more confident on the benefits of AI and less fearful of these technologies. CONCLUSION Contrary to anecdotes published in the media, undergraduate medical students do not worry that AI will replace human radiologists, and are aware of the potential applications and implications of AI on radiology and medicine. Radiology should take the lead in educating students about these emerging technologies. 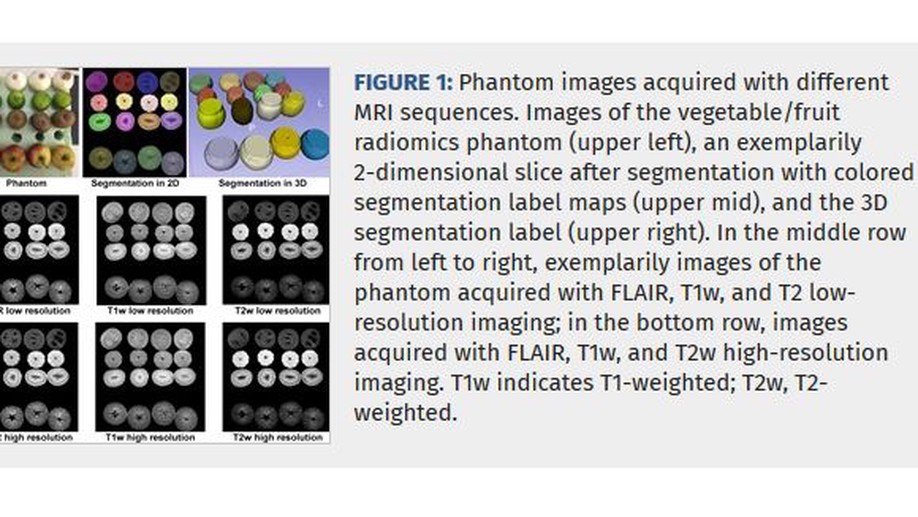 OBJECTIVES The aim of this study was to investigate the robustness and reproducibility of radiomic features in different magnetic resonance imaging sequences. MATERIALS AND METHODS A phantom was scanned on a clinical 3 T system using fluid-attenuated inversion recovery (FLAIR), T1-weighted (T1w), and T2-weighted (T2w) sequences with low and high matrix size. For retest data, scans were repeated after repositioning of the phantom. Test and retest datasets were segmented using a semiautomated approach. Intraobserver and interobserver comparison was performed. Radiomic features were extracted after standardized preprocessing of images. Test-retest robustness was assessed using concordance correlation coefficients, dynamic range, and Bland-Altman analyses. Reproducibility was assessed by intraclass correlation coefficients. RESULTS The number of robust features (concordance correlation coefficient and dynamic range ≥ 0.90) was higher for features calculated from FLAIR than from T1w and T2w images. High-resolution FLAIR images provided the highest percentage of robust features (n = 37/45, 81%). No considerable difference in the number of robust features was observed between low- and high-resolution T1w and T2w images (T1w low: n = 26/45, 56%; T1w high: n = 25/45, 54%; T2 low: n = 21/45, 46%; T2 high: n = 24/45, 52%). A total of 15 (33%) of 45 features showed excellent robustness across all sequences and demonstrated excellent intraobserver and interobserver reproducibility (intraclass correlation coefficient ≥ 0.75). CONCLUSIONS FLAIR delivers the most robust substrate for radiomic analyses. Only 15 of 45 features showed excellent robustness and reproducibility across all sequences. Care must be taken in the interpretation of clinical studies using nonrobust features. 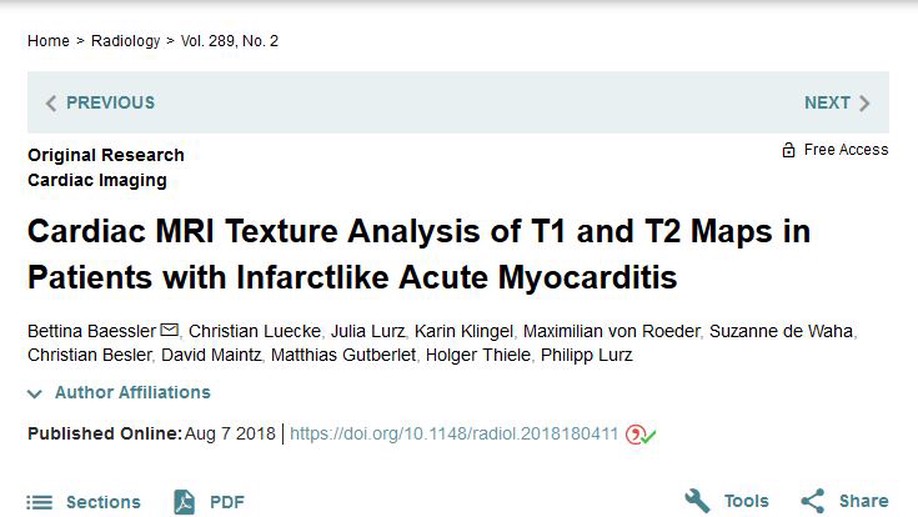 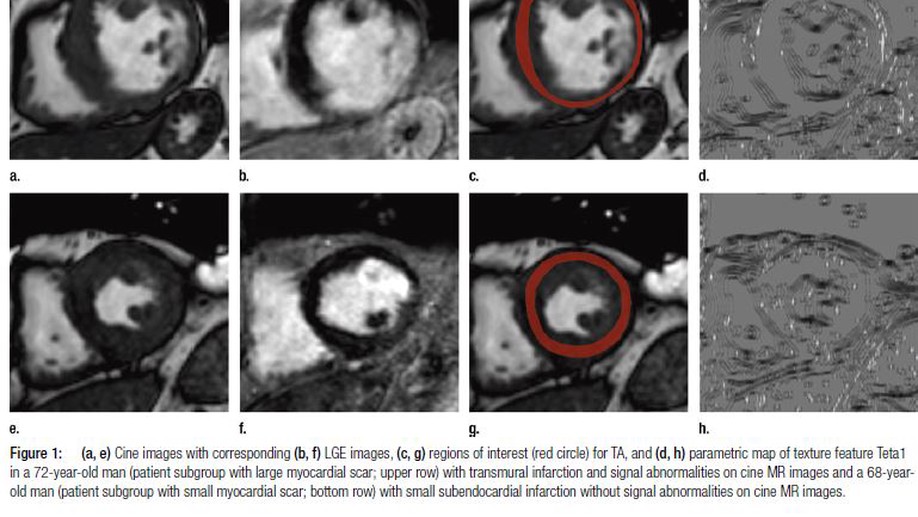 Precision, reproducibility and applicability of an undersampled multi-venc 4D flow MRI sequence for the assessment of cardiac hemodynamics

OBJECTIVES The aim of this study was to investigate the robustness and reproducibility of radiomic features in different magnetic …
Baessler B., Weiss K., Pinto dos Santos D.
PDF DOI 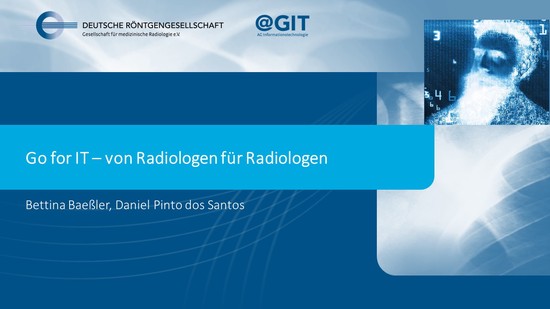 Go for IT webinar series

A webinar series to teach basics statistics, machine learning and R programming from radiologists for radiologists. Hosted by the … 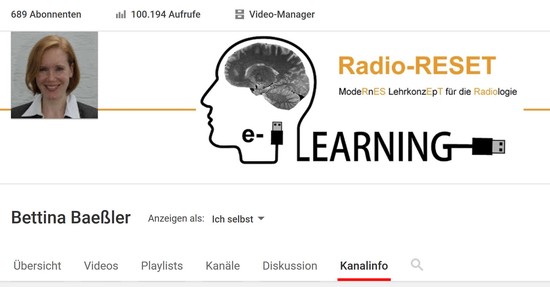 E-learning videos for the technical basics of the main modalities in radiology - X-ray, computed tomography, and magnetic resonance …